Tula (though she is never referred to as Aquagirl in the first season) appears in the Young Justice episode "Downtime" voiced by Cree Summer. She is portrayed as the childhood friend of Kaldur'ahm who ultimately entered into a relationship with his friend Garth after Kaldur left Atlantis to become Aquaman's sidekick. Unlike the comics, the Tula in Young Justice is shown to possess magical abilities that help her manipulate water. When Kaldur returns to Poseidonis for a dinner with the royal family, he invites Tula as his guest unaware that she has left him for his best friend. She eventually tells him about this, and the two reconcile during an attack on the city led by Black Manta, with Kaldur departing on friendly terms when he eventually returns to the surface world. Tula and Garth make a cameo appearance in "Failsafe", working alongside Red Arrow, Rocket and Zatanna in a training simulation. In the episode "Alienated" set five years later, Tula's death is mentioned as one of the reasons Aqualad (who is undercover about the Light's partner) has apparently turned on his former team. This is the first instance of Tula being referenced as Aquagirl in the series. In the episode "Satifaction", her statue is among the statues fallen of heroes located in the grotto of Mount Justice. In the episode "The Fix", Tula appears as a psychic projection when Miss Martian and Artemis Crock enter Aqualad's mind. 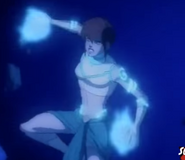 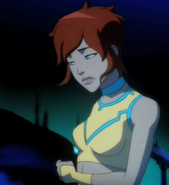 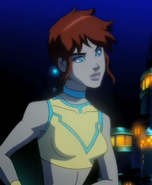