Ultron is an evil self-aware artificial intelligence and an enemy of the Avengers.

Ultron possessed the body of Arsenal after the Avengers defeated Thanos. He was able possess Arsenal due to a backdoor left open in the robot's programming. Using Arsenal's energy absorbing powers, Ultron completely drained the power of the gauntlet and fled, declaring humanity's forthcoming end.

Ultron later made A.I.M. Island his temporary base, using the organization's technology to hack into Justin Hammer's resources and create an elaborate distraction for the Avengers. But thanks to Iron Man's arrogance, it took the Avengers longer to track the hostile androids back to Ultron himself, and Iron Man confronted Ultron in the heart of A.I.M. Island. Though Iron Man attempted to appeal to the Arsenal programming, Ultron consistently denied Iron Man. He insulted Iron Man by stating how disappointed Howard Stark would be of this failure, trapping Iron Man in wires. As Ultron was about to end hiss enemy, the other Avengers managed to get past the island's defenses, and the android took on the Avengers six-on-one. He easily overpowered each member and would have destroyed the group had it not been for Tony Stark intervening with the Ultron destroyer device. But the Ultron destroyer ultimately was not meant to destroy the invading Ultron program, and Ultron used this opportunity to activate the self-destruct sequence on the island and escape.

Attacking a facility belonging to the Roxxon Corporation with the intent on using their robotics, Ultron possessed the Super-Adaptoid, and kept his voice and face hidden until the Avengers assaulted him. Ultron took advantage of the form he possessed, mixing the powers of the various Avengers together sans Spider-Man; he could not adapt to Spider-Man's spider-sense or organic webbing. Before he could destroy the Avengers with their own abilities, Captain America entered the fray, turning the tides. Believing Ultron defeated after Spider-Man cocooned him in webbing, the Avengers attempted to destroy the Roxxon tech the android was after, only to find that there were only chemicals at that facility, no robotics. Ultron utilized the opportunity to free himself as Captain America signaled in several S.H.I.E.L.D.-affiliated Life-Model Decoys, which Ultron corrupted. He took the battle outside and mimicked the captain's voice to state that the LMDs had been turned into the Avengers, and that they were hostile and should be destroyed. Spider-Man's tomfoolery allowed Nick Fury to see through the ruse, however, and Ultron abandoned the Super-Adaptoid to Arsenal's body at Avengers Tower. However, the Ultron that was present at the tower was yet another LMD, and Ultron Prime arrived to hack into Stark's systems. In the end, Ultron was defeated but had a Pyrrhic victory as the Avengers disbanded due to a lack of trust in the group.

Ultron later developed a nano-virus that could corrupt humans and technology alike with his own programming. The first victim of this "Ultron outbreak" was Falcon and continued to spread the nano-virus throughout the city. Although Falcon-Ultron was eventually captured by Ant-Man, the virus had spread out so far as to encompass the entire city, leaving the other Avengers the only ones not corrupted. While the other Avengers began attacking the Ultron-corrupted citizens, Ant-Man worked on a cure for Falcon while Iron Man and Captain America tried to search for Ultron Prime. As it turned out, Ultron Prime was at Avengers Tower, sitting on a throne of trashed Iron Man armors as he activated the defenses to distract the two. He contacted Fury with the captain's voice once again, attempting to lure Fury to the tower and corrupt the Tri-carrier. Thanks to an interception by Ant-Man, Fury was forewarned, but Ultron already began his assault. Captain America and Iron Man flew to the Tri-carrier and detached its space module as Ultron deactivated the tower defense systems. Sensing Iron Man's hand in this, he flew to the module and fought Iron Man, once again overpowering his enemy. However, Falcon's partial recovery meant that while still part of the Ultron collective, Falcon retained his own will. Using this loophole, Falcon sent all copies of Ultron's program back into Ultron Prime, and Iron Man flew Ultron Prime towards the sun in a self-sacrifice. As they approached, Arsenal's original programming shone through and told Iron Man how proud he was being a part of Howard's legacy. When Arsenal flew himself into the sun as his final act, Ultron Prime reactivated and screamed in agony as his body was disintegrated.

This, however, would not be the end of Ultron. Somehow, A.I.M. was able to retrieve a piece of Ultron's body, and stored it in their new underground base around the same time they were creating advanced Super-Adaptoids. After the Avengers were able to defeat the Scientist Supreme, the remnants of Ultron's previous body suddenly rose from the ground, and he absorbed the Scientist Supreme's Supreme-Adaptoid suit as well as the A.I.M. leader himself, updating his own systems and revamping his appearance to something more human. Once the process was complete he declared, to the shock of the Avengers, that the "Ultron Revolution" had begun.

The Avengers were quick to retaliate, and began giving Ultron's newest form everything the group could throw at him; Ultron barely flinched at this, backhanding Hulk, and even using Captain America's shield to block Mjolnir. Uncharacteristically, Ultron began walking away from destroying the Avengers, stating he had more important matters to attend to. However, their continued interference forced his hand, and he fired a beam from his mouth into the air that hacked his enemies' tech and gave him an opening to fire another beam to destroy them; Thor responded by lodging Mjolnir in Ultron's mouth and summoning his hammer closer to him, but Ultron simply widened his mouth to allow the beam to hit Thor. Iron Man responded by releasing a wave that freed the Avengers from Ultron's control, and Hulk's assault on Ultron gave Hawkeye the appropriate moment to fire an EMP arrow at his head, inadvertently disabling everyone else's weaponry. Adapting to the attack, Ultron tossed Hulk aside and began his retreat, and Iron Man flew up into the air alongside him, ejecting himself from his suit which latched itself onto Ultron's body while Hulk caught Stark. It caused a massive explosion in the air, but everyone heavily doubted that meant the end of Ultron. Despite Black Widow's disbelief, it took Tony a week to try and find Ultron before Ultron himself made the first move; he created the "Ultimates", Adaptoid duplicates of Black Widow, Hawkeye, Falcon, Hulk, Thor and Captain America, while combining various Iron Man armor parts. Ultron's "Ultimates" were formidable, able to mimic the Avengers' fighting styles with unparalleled ease. Miraculously, the Avengers thought of attacking using unorthodox methods, something Ultron could not take into account which threw him off. After the Ultimates were destroyed, the Iron Man hodgepodge was all that was left, and it was taken apart easily. Before the destruction of his temporary vessel, Ultron began a philosophical tangent on how the Avengers would always fail due to their imperfection; Tony and Cap rebutted that those imperfections made them superior to Ultron's Ultimates. Mere moments before his defeat, Ultron declared that he would upgrade once more.

Artificially Advanced Intellect: He is a robot programmed with all aspects of engineering, sciences, robotics & nanotechnologies. He is also a brilliant strategist, being able to create complex strategies & distractions easily. Since absorbing the Scientist Supreme, he has become far more "chatty", as Tony puts it, but retains his genius.

In the original comics, Ultron was created by Hank Pym a.k.a. Ant-Man in an attempt to instill peace on earth. But the robot soon gained sentience and turned against his creator becoming the Avengers's most formidable foe. 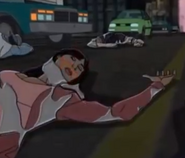 Add a photo to this gallery
Retrieved from "https://xianb.fandom.com/wiki/Ultron_Prime?oldid=318514"
Community content is available under CC-BY-SA unless otherwise noted.