Bulma Leigh[1] is a character who appears one hundred years after the defeat of Omega Shenron. She is only seen at the World Martial Arts Tournament to cheer on her son Vegeta Jr.

Having descended from the Brief family, she strongly resembles her ancestor Bulma in face and hair color (though her actual hair texture appears to be spikier like that of a Saiyan as opposed to the naturally straight, flat-lying hair typical of the Briefs family); however, it is never specified if she is descended through Trunks or Bulla.

In her only appearance, she is revealed to be the head of the Capsule Corporation, and does not know Pan, which suggests that Vegeta and Goku's descendants grew apart from each other as the years passed. 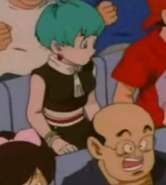