Velma Dinkley is a teenage citizen of Crystal Cove and a member of the town's newest incarnation of "Mystery Incorporated". She lives with her parents who run the Crystal Cove Spook Museum for tourists interested in the hauntings of Crystal Cove.

Velma is frequently referred to as the smartest member of the new Mystery Incorporated, as well as the smartest student at Crystal Cove High. She strongly believes in finding proof and evidence before determining something is real. Velma has also been described as somewhat of a "computer whiz", and is very knowledgeable when it comes to computers and research.

She also seems to be the most scheming and secretive member of Mystery Inc, as illustrated by her posing as the mysterious masked figure,[3] and keeping a number of secrets from other gang members (like the true identity of the Angel Dynamite).

She pursued a relationship with Shaggy Rogers and became frustrated when he seemed more interested in his dog and in food than in her. When she thought Shaggy didn't want to take her to the prom, she actually kicked over several tombstones in a cemetery they were exploring.

After being dumped by Shaggy, she takes the break-up very hard and decides to ignore Shaggy and Scooby's attempts at friendship, showing she can be very bitter. Despite her history with Shaggy and Scooby, she eventually realizes that they need to work together to perform their best as part of the gang, and she admits that she would never let anything bad happen to Scooby despite the fact that her boyfriend chose him over her.

She seems to be very strong when she's angry, being able to kick tombstones out of the ground.[4]

She demonstrated considerable defensive martial arts training, easily dodging Shaggy and Scooby when they attacked her at once.[3]

She also makes often use of her smartphone, laptop, and binoculars.

Velma and the gang solved the mystery of the Creeper and it was revealed to be Deacon Carlswell. (The Legend Of Alice May)

She has competed with Hot Dog Water in a science fair circut more than once, and won. (Menace Of The Manticore)

Velma was sent to jail with the gang after solving another mystery, but they were soon released. Velma wanted to be open about their relationship, but Shaggy didn't want to hurt Scooby-Doo's feelings of someone coming between them. After solving the mystery of the Slime Mutant the gang recieved a call from Mr. E at K-Ghoul, warning them that a greater mystery was buried beneath the town. (Beware the Beast from Below)

She helped Fred stop the Ghost Truck from ruining Crystal Cove and the culprit was taken to jail. (The Secret Of The Ghost Rig)

She told Shaggy to cut off junk food and go for healthy food and Scooby got confused before the Man-Crabwas captured in the end. (Revenge Of The Man Crab)

She helped the gang stop Que Horrifico and Shaggy told her that he wanted her to take the tight pants back and it was time she knew that "Shaggy likes baggy" and he danced with Velma and Scooby giggled. (The Song of Mystery)

Velma told Shaggy to go to the prom and Scooby had suspected that they were on a date before the Ghost Girlwas taken to jail and released by Mr. E's henchman and Velma wasn't happy that Scooby wasn't polite. (The Legend of Alice May)

She was a big fan of the Hex Girls and had defeated the Phantom with the gang. In the end she watched Scooby and Shaggy reunite, making her jealous. (In Fear Of The Phantom)

She still wasn't happy after Scooby fought her over Shaggy and she tried to fight back, but failed and found a letter from Mr. E that read "Don't panic this has all happened before." and she opened it and a picture of Professor Pericles was shown. (The Grasp Of The Gnome)

Velma and Shaggy were kissing each other and Scooby wasn't happy. (Battle of the Humungonauts)

Scooby was sent to jail when suspected for being the Fright Hound meaning Velma could get some time alone with Shaggy, before she got her heart broken. (Howl of the Fright Hound)

She didn't wanted to talk to Shaggy anymore. (The Secret Serum)

At Darrow University, Velma told Scooby that she wasn't happy about her break-up with Shaggy and Scooby apologized. (The Shrieking Madness)

She still refused to be friends with Scooby, while dealing with the Cicada Creature. (When the Cicada Calls)

Within Scooby's feverish dream, Velma along with Fred, Daphne and Shaggy got captureed by Lord Infernicus, who made guinea-pig identicals. (Mystery Solvers Club State Finals)

She and Scooby were left tied up by the Shadowy Orc and she talked to Scooby about Shaggy. Velma almost fell to her death, but Scooby rescued her before the evil orc imposter was jailed.

She fell in love with Shaggy from Aphrodite's love spell and Scooby was immuned to the spell and he has to solve the mystery with Pericles.

She went to Darrow University and met a hermit named Danny Darrow in his home buried beneath the University. When the mansion began to sink farther the gang escaped, but Danny Darrow was left behind and was presumed killed.

Velma and the gang had to solve the mystery from the White Wizard and the gang are being helped by the Red Wizard.

She had to help Shaggy, Scooby, and Vincent Van Ghoul from Nightfright (Nightfright)

Velma had no friends and now she was friends with a mermaid named Amy, but it shows that the mermaid was Amy Cavenaugh the wife of Dr. Spike Cavenaugh and Velma suspected Angel was Cassidy Williams and the Fish Freaks were goners. (The Siren's Song)

She, Fred, Daphne and Shaggy were attacked by a Manticore, but Scooby fought it and the creature said "You are doomed, flea-covered one! Doomed!". The Manticore was revealed to be Hot Dog Water. (Menace Of The Manticore)

She forgave Shaggy and became friends with him, and she wanted it stay that way, which disappointed Shaggy because he was hoping for something more. (Attack Of The Headless Horror)

Velma had to help Fred stop a Shadowy Figure and it was just Professor Pericles before he escaped with the piece. (A Haunting In Crystal Cove)

Velma and the gang met Prof. H.P. Hatecraft again and he unmasked the Obliteratrix revealing Alice May underneath and she was taken to jail again. Velma told Angel Dynamite to tell the truth and Angel told everyone that Angel wasn't her real name, it was Cassidy Williams and she also told them the Freak of Crystal Cove was here, but the gang were mad at Angel for lieing to them and they ignored her, but the Freak watches them and laughs evily. (Pawn Of Shadows)

Velma was in trouble with the gang. The Freak was captured and revealed to be Fred Jones, Sr.. Brad Chilesand Judy Reeves were Fred's real parents. Daphne started to cry that Fred was leaving and Mystery Incorporated was "dead", and told Velma that she should have told them the truth about Angel sooner, leaving Velma sad and her parents walked her to their car. (All Fear the Freak)

While the town was under attack by Crybaby Clown, She approached the new Mayor (in disguise) and gave her information on where Scooby and the others were.[3] 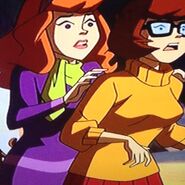 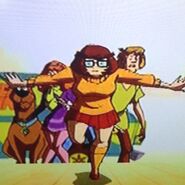 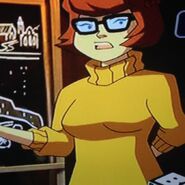 Add a photo to this gallery
Retrieved from "https://xianb.fandom.com/wiki/Velma_Dinkley_(Scooby-Doo!_Mystery_Incorporated)?oldid=272891"
Community content is available under CC-BY-SA unless otherwise noted.