Vicky Khan is one of Vicky's ancestors. She was the babysitter of Genghis Khan.

She is an evil babysitter just like her descendant, Vicky. Although Genghis Khan is known for his nasty attitude, even he was terrified of his babysitter, Vicky Khan.

Vicky Khan looks exactly like her descendant, Vicky, but she has an evil goatee and mustache, and wears the same barbarian attire as Genghis Khan and his Mongol horde.

Vicky Khan only made one appearance in series in the episode The Really Bad Day. Timmy Turner discovered this when Cosmo had to be "bad" for a whole day. Wanda poofed up Genghis Khan and his "mindless warriors" to give Cosmo lessons in how to be bad. Khan appeared to be a really tough, ruthless warrior commander; until Vicky Khan came on the scene. She cowered Genghis Khan and his mighty warriors into submission by threatening to cancel the Big Yak Roast. 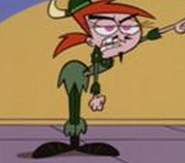