Dracula's Symbiote
Vlad Dracula is the legendary King of the Vampires. He ruled the Vampire nation for centuries, keeping his identity a secret from humanity, allowing them to believe he is nothing more then a myth. During World War II, Transylvania is invaded by Hydra. He formed an alliance with the Allied Forces and worked closely with Captain America, with the idea of my enemy's, enemy is my friend.

Dracula was contacted by one of the Red Skull's probes with an offer to join his Cabal. A collection of villains gathered to help defeat the Avengers.[1]

The Avengers battle Dracula who had kidnapped Black Widow and turned her into a Vampire. They travel to Transylvania and confront him at Castle Dracula. He reveals that he was an ally of Captain America during World War II, working together to defeat the invading Hydra forces. He wants the Super-Soldier Serum in Cap's blood which will allow him and his subject the ability to go out in the sunlight. During the fight he drinks the Hulk's blood absorbing his powers and turning the Hulk into a Vampire. However the Hulk gamma cells act like tiny suns and he burns away the infection, which also weakens Dracula. In his defeat his minion drag him underground to safety. In his weakened state he is met by the Red Skull who offered him a position in his Cabal.[2]

Dracula planned to obtain the pieces of the Tekhamentep's Ankh and join them together so that he could be harmed by vampire weaknesses. Dracula arrived at the Museum of Natural History after Spider-Man removed the Tekamentep's Ankh from it's cloaking shield. He engaged Blade and Spider-Man's team in battle where Nova's supernova maneuver attack did not work. He even tried to bite Power Man only to discover his invulnerability which resulted in Dracula using his mind-control on Power Man to control him into attacking Blade and the rest of the team. Then Dracula mind-controlled the rest of Spider-Man's team which did not work on Spider-Man since he had reflective lens in his mask. In the Herbarium, Spider-Man activated the UV lights which harmed Dracula until the Spider-Man's mesmerized teammates got Dracula away from the museum. [3]

Dracula was one of the few Cabal members who teamed up with the Avengers to stop the Cosmic Skull.[5]

Vampirism: Dracula, like all other vampires, is capable of transforming an individual into a vampire by biting them.

His greatest weakness, like that of other vampires, is that he must ingest about one quart of fresh blood in order to maintain his vitality. Otherwise, his powers will steadily decrease to the point where he enters a comatose state. Dracula is highly allergic to silver and can be severely injured, or killed, with silver weaponry. If Dracula is injured by silver, his recovery time is considerably slower than normal. Dracula is also unable to withstand exposure to direct sunlight. His tissue begins to instantly dry up and will crumble to powder within a matter of moments. Dracula can be killed by having a wooden stake plunged into his heart, somehow interrupting the mystical energies that keeps him alive. Dracula can also be killed by being decapitated and being exposed to fire. Dracula can also be affected by religious icons, such as the Star of David or a crucifix for example. Dracula is affected by the strength of the wielder's faith in the icon and religion it represents, not the size of the icon itself. Dracula must rest within his coffin during daylight hours. He must line his coffin with soil from his homeland in order to both sustain his power and travel more than 100 miles from his birthplace. It has also been shown that gamma rays have a similar effect on Dracula to UV radiation. 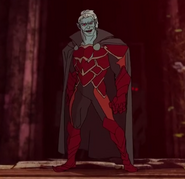