A technique created by Naruto.

The next step will be to cut that waterfall. Press your hands to the water and cut the flow by slamming it with wind chakra. But it's a waterfall! That's right. And that means in order to be successful, you'll need a large amount of change in chakra nature. KAKASHI: If you're able to pull it off, it's something you'll always be able to use in battle. You're going to need Yamato's chakra control at all times during this exercise. Multi-shadow Clone Jutsu! I've got to form a mental picture of the wind chakra. To activate it, imagine your chakra splitting in two and grinding against each other. Grinding them? Just as if you were finely sharpening the blade between the two halves of your chakra. Finely and sharply, that's the trick. As we expected, this will probably take a while, huh? Nothing we can do but be patient.

KAKASHI: What you need is to transform a massive amount of chakra into wind to cut that waterfall. Make too many clones, and each one's chakra will be that much weaker. Besides, that waterfall's barely wide enough for the 10 of you. KAKASHI: You're not storing the chakra you create inside yourself long enough. Take more time, be more thorough. But if it takes that long, what use is it on the battlefield? You're still in training, Naruto. Don't worry about the battlefield. Once you get used to it, it'll flow faster. Yeah, but-- -Oh, for crying out-- Listen, the change in nature usually takes years to perfect. Even leaf-cutting normally takes six months, at least. YAMATO: You mastered it in only a few hours.

Concentrate on everything you've learned so far, and then break off the Shadow Clone Justu, all right? Time to tally up for the day. Boy, this training method really is something. I can't believe he succeeded so quickly. No, it's not just the training method spurring him forward. His driving force is Sasuke.We did it! We cut the waterfall! Now we can start developing your own signature jutsu.

According to Yamato it only works half of the time. According to Naruto the attack is awesome when it hits. According to Yamato The name is misleading. Rasen Shuriken is meant to be a frontal attack. Thus the need for an accompanying diversion. In this case the Shadow Clones. The problem is his new Jutsu burns too quickly and only lasts a few seconds.

In order to defeat Kakuzu Naruto hid himself in the crowd of Clones. According to Kakashi the number of separate attacks was almost infinite. Even Kakashis Sharingan couldn't follow them all. What a magnificent Jutsu.

It appears the boys Jutsu is useless so long as I keep my distance. So Ill just have to avoid close combat. And don't let myself get distracted by the clones and keep my eye on the original. All right that should be simple enough. 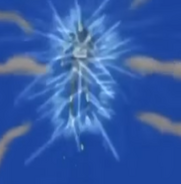 Add a photo to this gallery
Retrieved from "https://xianb.fandom.com/wiki/Wind_Style:_Rasen_Shuriken?oldid=91978"
Community content is available under CC-BY-SA unless otherwise noted.