Weapon X
X-23 was the twenty-third attempt to clone the original Weapon X in female form. She was created by Dr. Sarah Kinney and molded into the ultimate killing machine by a mysterious organization known only as 'The Facility'.

Looking to duplicate the success of Weapon X, a group called 'H.Y.D.R.A.' conducts experiments to create an ultimate weapon, a perfect soldier. They failed 22 times, but the 23rd attempt was a success. The solution was Logan's healing factor. To duplicate his mutant ability they used Logan's DNA, creating a clone. During the process, they had to make some changes, creating a 'hormonal instability'. Their training of 'X-23' resulted in emotional instability, and a hatred. They had created the ultimate warrior, but they couldn't control her.

He first mission was an extraction mission, she was to break into a S.H.I.E.L.D. base and steal information from databases for mutants and S.H.I.E.L.D. operatives, possibly for assassination. However, when she reads Logan's profile she snaps, she goes A.W.O.L. and escapes the base. Blaming Wolverine for her traumatic childhood, X-23 goes renegade and arrives at the mansion to find her revenge.

She hides in the Mansion's forest, watches as the New Recruits play outside and Beast's lesson, she spies on the various X-Men, watching Kurt tease Kitty, Scott and Jean washing up, and breaks into Jean's room. She investigates Jean's stuff until she's found by one of the New Recruits, taking them out with a 'disk', a small device that causes paralyses, she then slowly picks off all the X-Men using her stealth training, including Xavier when he finds her crying. Scott, Ray, and Rogue are the last X-Men unharmed when Logan shows up, but each are promplty taken out. She then attacks Logan, blaming him for her Life, at first Logan refuses to fight her, allowing her to easily force him outside, however, he reveals his more advanced training and skill, being able to trap her from attacking or escaping, before revealing that, he not only had no idea she even existed until this morning but that had he, he would have killed the men responsible. She breaks down, no longer able to deal with her life and her emotions, until Logan insists she stops trying to repress them & let them out, before allowing her to escape so S.H.I.E.L.D. doesn't catch her. Logan's plan was for her to then return and he'll protect her from S.H.I.E.L.D., but she runs from the mansion's grounds, knowing that H.Y.D.R.A. will come for her and take the X-Men for experiments. X-23 ends up finding instead her only family in Wolverine

X-23 spends some time in the wilderness, trying to track down H.Y.D.R.A.'s Headquarters so she can exact her vengeance. However, ﻿H.Y.D.R.A. kidnap Wolverine and leave him in the woods, planning to draw X-23 out to save the older injured Logan from Omega Red, a Russian Mutant terrorist who has a history with Logan, Sabertooth, and two other mutants named 'Wade' and 'Maverick'. Omega Red wants to kill Logan for leaving him broken in the past, but is interrupted by X-23, who, in full health, easily outmatches a stunned Omega Red before taking Logan to safety.

Logan tries to convince her to return to the X-Men, but she refuses until she can stop everyone chasing her, showing the wish to die or have her memories wiped like Logan. She tells Logan to go home, as he is both too tired to help her and his Healing factor has been regressed from falling from an airplane without a parachute. He refuses to leave her until He too can stop H.Y.D.R.A. and get Fury to leave her alone. However, they're caught in an Ambush in which they're disabled By Gauntlet a Mutant Mercenary who H.Y.D.R.A. hired to capture X-23. Logan is told by Madame H.Y.D.R.A. that X-23 has been hunting them, trying to get revenge on them for her tournament. Her capture means that now they can brainwash her and wipe her memories so that she may become their perfect assassin. However, unknown to them is that X-23 still had some of her paralysis Disks, using a deactivated one to play possum & escape containment, stealing some explosives and disarming several guards and security systems. She manages to get on board Madame HYDRA's Air ship, forcing Logan to fall off of it so she may die killing H.Y.D.R.A.'s head. She blows the airship up, with her, Madame H.Y.D.R.A., and Gauntlet on board, apparently killing her.

S.H.I.E.L.D. rescue Logan & arrest H.Y.D.R.A.'s staff, including Omega Red, When Nick Fury asks about 'the girl', Logan tells him she didn't make it, implying that they've found Gauntlet & Madame H.Y.D.R.A.. However, when Logan begins to turn his back, he picks up X-23's scent, realizing that she is indeed alive. X-23 watches from afar as S.H.I.E.L.D., now believing her dead, have arrested everyone from H.Y.D.R.A. and she may live peacefully, before running off, now for the first time in her life she is free, and happy.

When Charles Xavier was under Apocalypse's control, he was able to scan the mind of Apocalypse. In the future, Xavier saw an adult version of X-23 that would one day join the X-Men and be a part of the main team.

X-23 is Wolverine's abused clone who broke out of a training session laboratory, freeing herself. She blames her terrible past on Wolverine, and intends to hunt him. As S.H.I.E.L.D. tried to capture her and put her back in confinement, Wolverine insisted that he do it. While X-23 started to face off with him, S.H.I.E.L.D. interrupted, so Wolverine told her to flee while he will handle them. Wolverine encourages them to let her go by reminding them that she has gone through enough.

X-23's life of confinement and mistreatment has groomed her to repress her emotions. Because of this, she is more calculating and apathetic, to the point where she borders on Asperger's Syndrome. She is prone to fits of depression, in which she sits in a corner and cries like a newborn for hours on end.

Her training, being something of a military-based style, has left her scarred and traumatized, adding to her fragile state. She often stays very quiet as usually, speaking causes her to breakdown in tears or rage. Her anger is noted to be a factor, she easily goes into fits of rage where she could destroy large amounts of property and objects, including cutting through a wall and attacking several scientists during her breakout.

X-23 is a Caucasian-mix teenage girl with a tan skin complection and an athletic and well-fit built. She has long dark brown hair that she wears loose and comes down around her mid-back with green eyes. X-23 usually wears a leather military jacket with tan accents on the upper arms of the jacket with form-fitting leather pants. She wears a tan tank top shirt underneath her jacket with black gloves and black combat boots. She is most likely part Polynesian, or black, as Logan is white-skinned, but Laura Kinney (who's DNA was used to fill the gaps in the strands of Wolverine's salvaged DNA) is shown to have dark, tan skin. 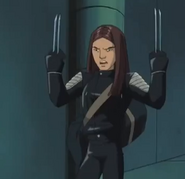 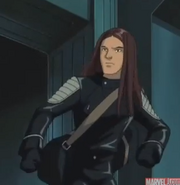 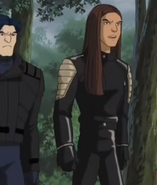 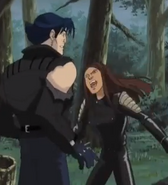 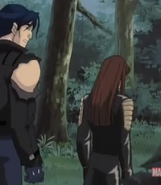 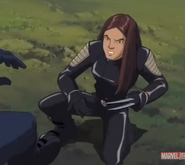 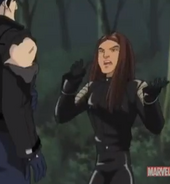 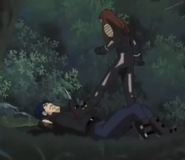 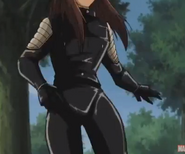 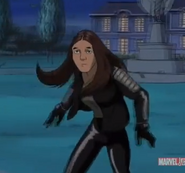