Start a Wiki
Yakko Warner is the main protagonist in Animaniacs and the oldest of the Warner siblings, because in an interview with producer Tom Ruegger, he stated that Yakko is biologically 14 years old.

Yakko, as his name implies, is the most talkative and quick-witted of the Warner siblings. He's also the tallest and oldest of the three.

Yakko is the smart-aleck older brother of the Warner siblings. Out of the three Warners, Yakko is the triangle leader, taking charge of most situations, and Wakko and Dot look up to him. Being the oldest, much of the adult humor comes from him, though whenever it comes from anyone else, Yakko quickly pipes in with "Goodnight, Everybody!"

Yakko and his brother, Wakko, are infatuated with the beautiful Hello Nurse. Whenever they spot her or another attractive woman (or Minerva Mink), they react in an exaggerated manner (for example, howling like wolves) and shouting "HellOOOO, Nurse!" This is usually followed by them lunging into her arms and giving her a large smooch. They also add some kind of title to "Helloooo Nurse!" in some episodes. Like in Cookies for Einstein, when they see a Swiss girl selling chocolate, Wakko shouted "Hellooooo Swiss Nurse Miss!" They mean no true harm when they do this, As it merely their own cartoonish way of showing affection.

Yakko's abilities include a fluent understanding of the Japanese language and wielding two paddleballs at once. He is "the very model of a cartoon individual" according to the song of the same name in the cartoon "H.M.S. Yakko".

He is the "guardian" of the trio, or the parental figure (Though Dr. Scratchnsniff also takes this role), as he seems to take charge in many situations, and acts generally in a father-manner towards his siblings (Especially in Wakko's Wish). However to Wakko and Dot, he can be seen to argue with or tease them like an older brother typically does as shown in the song "I'm Mad". However, when the need arises, he is loyal and protective.

He knows his limits and, while he will tease some people, he knows what to say and when to employ diplomatic charm to calm them down - or at least try to. This can be seen when he interrupts Dot's "I'm Cute" song, but notes that she is "Awfully cute" when angered. He deeply cares for Wakko and Dot, which is seen in Wakko's Wish, as well as some episodes in the series.

Though he, along with his siblings, is zany, he sticks to a high moral code and never torments anyone unless they're asking for it.

Yakko and the other Warner siblings were "born" in a Warner Bros. animation studio in the 1930s. Unfortunately, they and their cartoons were far too wacky and zany for their time. This, combined with their knack of causing trouble, caused them to be captured and locked up in the studio water tower "never to be released!" As for their movie/cartoon reels, they were locked away in a separate Warner Bro's vault and possibly considered hazardous.

In 1993, the Warners managed to finally escape from the watertower and again began to wreak havoc. In an attempt to end the chaos, Thaddeus Plotz, CEO of Warner Bros., assigned Dr. Scratchansniff to keep an eye on them, and to try to investigate and "cure" them of their zaniness.

There are many different stories on how they were created. In Draculee, Draculaa, they are on their way to Pennsylvania due to the fact that their parents were pencils, but in some episodes like King Yakko, they seemed to be related to royalty. Their royal heritage is also shown in Wakko's Wish.

Yakko is the vocal of the Warner trio. He has a comeback for any situation and can out pun even the best, as shown with Howie Tern (A parody of Howard Stern). He is also known for more of the adult humor of the show and will shout "Goodnight Everybody!" whenever there is a double innuendo (or anything suggestive) said. He often addresses the audience directly, usually with a sarcastic comment.

Yakko, like his siblings, is an ambiguous dog-like cartoon character. He is the tallest of the three, and wears khaki pants up to his waist with a large belt. Like his siblings, he also has short black fur covering most of his body and white fur over his face, cheeks and eyebrows. His eyes are black and he has a small red nose, black ears, as well as a tail that sticks out through his pants. He was also seen with an addition of a green scarf in the movie. He also (along with his other siblings) can be seen with different attire in specific episodes (like Roll Over Beethoven) such as top hats, sashes, suits, etc.

It also seems as though he can store a variety of items within his pants (including a yak), much like Wakko does with his "Gag Bag". He doesn't seem to do this as much as Wakko. 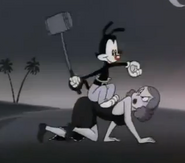 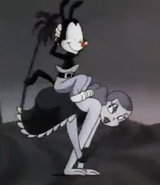 Add a photo to this gallery
Retrieved from "https://xianb.fandom.com/wiki/Yakko_Warner?oldid=317458"
Community content is available under CC-BY-SA unless otherwise noted.