He is Master of the Wood Style Ninjutsu. He is also Captain of Team Kakashi.

Yamato graduated from the Academy at the age of six, and at that same age, was promoted to the rank of chūnin. As a child, the boy was abducted by Orochimaru and became one of sixty children that were his test subjects. They were injected with the First Hokage's DNA in the hopes that they could replicate the First's ability to use Wood Release. Orochimaru later abandoned the experiment, believing that none of them had survived. In actuality, this boy was the lone survivor and found himself endowed with an unquantified Wood Release and likewise the First's abilities to control tailed beasts. In the anime, while contained in a test tube, he was fully conscious of his surroundings, watching in horror as other children died from failed experiments. Not wanting to die himself, he used his Wood Release to escape. He was soon afterwards found by Danzō Shimura. Having lost all memory of who he was, the boy was taken in by Danzō, where he was recruited into the Anbu's Root division under the codename Kinoe (甲, Kinoe). Having high hopes for Kinoe, Danzō began to personally train Kinoe as a Root operative. He also gave Kinoe a scroll containing the secrets and various techniques of the Wood Release.

In the anime, Yamato led Team 7 on a mission to the Fire Temple. Upon arrival, Chiriku informed them that the tombs belonging to a former member of the Twelve Guardian Ninja had been robbed of its corpse. While Yamato pondered the motive fached them which had reached the Fire Temple that the graves of three other former Ninja Guardian members had also had their corpses stolen. Yamato, his team, and Chiriku went to investigate and find the four coffins. While Yamato knew it was clearly some sort of trap, he knew they had no choice but to play along if they wished to retrieve the bodies.

As they neared the coffins, the trap was sprung, and the team became trapped in a rocky cavern. While searching for the way out whilst dodging more traps, Yamato was approached by one of the thieves,Fudō. Caught off guard and completely unprepared for an opponent such as this, Yamato was overpowered by Fudō's unique earth-technique prowess and indestructible body, forcing him on the defensive. Eventually, Fudō caught him in a rock-crushing technique, but deceived Fudō by merging with the rocks. Yamato regrouped with his team and, having failed to recover the stolen corpses or capture the tomb robbers, returned to Konoha with Sora.

Later, when the tomb robbers emerged again to attack Konoha, Yamato was one of the few jōnin still available to defend the village. He was then sent out to stop one of the resurrected Ninja Guardians from completing the Limelight technique, but was intercepted by Fudo. After figuring out Fudo's attack patterns, Yamato used Fudō's blunt attack methods to set up the area for a water technique to trap Fudo in mud. He then proceeded to finished off Fudō by crushing him with a wood ninjutsu. He went to join Asuma and the others in stopping the bandits' leader, Furido, who released Sora's Nine-Tailed Demon Fox chakra. Because Yamato's wood release was not as refined as the First Hokage's, he couldn't suppress Sora's spliced demon chakra. Yamato instead used his wood technique to protect his allies from Sora's attacks.

That's right. So far, all I really know about you three is what I've read in your files. I want to get a better idea of your battle skills. Your individual fighting styles and jutsu. I want to see them myself. The more we work together and learn about each other the more it will help with our teamwork. You might think I'm being unnecessarily cautious...But that's the way I am. Keep a very close eye on him,study his every move...All right... That concludes the simulation.

If you hadn't fallen for the Captain's obvious trick...he never would have found out I was hiding somewhere else.And perhaps I might have been able to capture him with even less trouble than I had.Why even bother masquerading as me...if you're going to reveal yourself almost immediately by using one of your own jutsu?Because of your mistake, the Captain was able to see through our strategy and use a Substitution Jutsu to escape into the forest.Well, then...if you knew it was a Substitution why didn't you break your jutsu right away?It's impractical to fight while covering for someone who's lost his cool. I simply considered what would best ensure mission success and acted accordingly.

(Sai) I wonder what Sasuke would have done...?Would he have wanted to fight an enemy and cover for you at the same time?I mean after all, you consider him to be a comrade, right?Though, how you can call someone...who betrayed his own village a comrade...is beyond me.

You should never overestimate your own Jutsu. Always make sure that the Job is done. 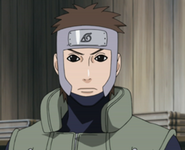 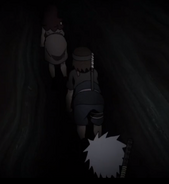 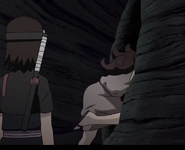 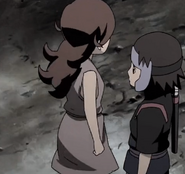