Xianb Wiki
Register
Don't have an account?
Sign In
Advertisement
in: Clowns, Humans of Flashpoint Paradox Timeline, Deceased,
and 9 more

Yo-Yo is a henchman of the Joker in the Flashpoint timeline. In search of intelligence on the location of the Joker's funhouse and the kidnapped Judge Dent, Batman pursued Yo-Yo through Crime Alley. He attempted to shoot her but Yo-yo disabled him with her yo-yos and proceeded to strangle him. Batman retaliated and based her against some girders. When Yo-Yo refused to cooperate, Batman began carving her visor with a Batarang. She mused Dent was probably dead already. Batman tossed her over the side of the building but she was saved by Cyborg. Yo-Yo quickly surrendered to him. 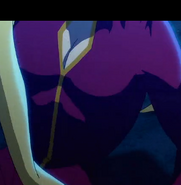