Yota (ヨタ, Yota) was a young child from an unknown clan with mysterious powers of weather manipulation.

Yota was born into a travelling clan who could manipulate weather and use their skills to make a living. Five years before the start of the series, Yota died at a young age of natural causes due to his frailty yet was later reincarnated byOrochimaru as a test subject in his research on Impure World Reincarnation.

Sent to Konohagakure on Orochimaru's command, Yota met Chōji Akimichi, Shikamaru Nara, and Ino Yamanaka when they came looking for Chōji's kunai set, which after being thrown pinned Yota to a tree. The crying Yota caused a downpour that ultimately collapsed the tree and freed him. Soon afterwards, Yota introduced himself to the young Konoha children as they decide not to tell the adults about him as there was already tension between Konohagakure and the other nations. They instead give Yota shelter in a makeshift tree-house and bring him food at a regular basis. Eventually, after meeting Kiba Inuzuka, his dog Akamaru, and Sakura Haruno whom he took a liking to, Yota started acting bold from appearing in the village to playing a small prank on Sasuke Uchiha.

Around this time, Yota met Naruto Uzumaki while he was whistling and became friends with him while asking him to teach him how to whistle. However, despite having a good time with his new friends, things changed when Yota decided to hide with Naruto during a game of hide and seek. Mistaking Naruto telling him to hide elsewhere as a sign of dislike, Yota ran off while causing his presence to be known to the Konoha Anbu as they capture him for interrogation with Naruto and the others hatching a scheme to save Yota.

After saving Yota, the group reached a very steep river and tries to cross it, but Naruto, Shikamaru, and Chōji were washed away by the strong current only to be saved by Yota, who failed to resurface after the incident. They later find Yota seemingly on the verge of death as he gives the group his goodbyes while erasing their memories of him. Not wanting his friends to be put on danger once more, Yota leaves Konohagakure and lives out the remainder of his manipulation in loneliness before ending up under the thrall of Orochimaru's spy and right-hand man Kabuto Yakushi.

Among the reincarnated ninja under Kabuto's control, Yota is deployed during the second day of the war when a faction of the White Zetsu Army attack. At that time, three of the White Zetsu clones assume Yota's form and target the friends he made in Konoha: one confronting Team Asuma with powerful rain storms, another taken to the Allied Shinobi Forces' medical camps where Sakura is before producing snow that develops into an intense snowstorm, and the third assaulting Kiba and Akamaru with lightning bolts. In the process, the Konoha ninja begin to remember Yota.

Sensing the weather changes, Naruto runs into the real Yota as the child attacks him with sharp gusts of wind. Having concluded that the other Yota are White Zetsu in disguise, Naruto tells the others to deal with the fakes as he faces Yota. Yota via telepathy tells his friends his origins and final words and that they don't need to feel guilty. With this, Yota uses his own technique against himself while happily declaring that he found friends despite being dead.

Yota was a naive, carefree, and fun-loving boy. He would occasionally break out in singing about the weather and habitually nickname people based on their most noticeable trait. He was also very sensitive, easily being made sad and would ultimately break out in tears. He also appeared to have a very big appetite.

A special ability known by his clan, Yota can to freely manipulate the weather around him. Regardless of the natural atmosphere around him, he could manifest many different weather effects, effectively turning them into powerful attacks or defences. It should be noted that his area of effect is not limited to outside, as he is able to isolate his abilities to relatively closed off areas, while within them. Yota has shown to have a great level of control over the range and direction of his ability, and could use them simultaneously if need be.

The following effects have been shown: 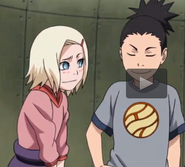 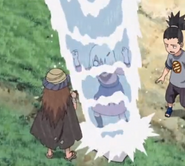 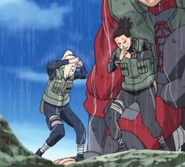 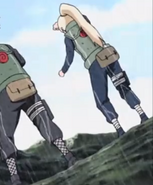