Killer B falls victim to the Infinite Tsukuyomi after surviving the tailed beast extraction. Inside his dream, B, Yugito Nii, and their respective tailed beasts, Matatabi and Gyūki in chibi forms plot to infiltrate Sunagakure to rescue Gaara and his tailed beast Shukaku. However, upon entering the cell where they were being held, they are confronted by a gigantic version of Karasu. While Gyūki restrained the puppet, B freed Gaara and explained that they had a mission that only a jinchūriki could undertake and passed on the details to Gaara via a fist-bump. Rendezvousing with Yugito and Matatabi who had gone to retrieve Gaara's sand gourd, the two Kumo-nin part ways to find the other jinchūriki. B and Gaara head to Konohagakure to find Naruto Uzumaki and Kurama who have been locked up in the mouth of Tsunade's bust on the Hokage Rock. Causing a ruckus to be released despite being told to be quiet, ramen is soon delivered to him, revealing his true intentions. The guards are knocked out before Naruto can retrieve his meal, however, and B is able to break open the cell using Lariat in his Version 1 state. Before they can escape, a fail-safe is activated and they are sucked into the statue and detained underground by Tsunade, Shizune, and an Anbu detail. While B is besotted by Tsunade's figure, the Hokage decides to settle things by gambling as opposed to having three jinchūriki rampaging through the village. Asking to check the dice, Gaara has Shukaku transform into a replica of them to throw the game in the favour, though Shukaku is not able to hold the form for too long after Tsunade's vigorously shakes the dice. Gyūki takes the opportunity to blow a dust cloud of ink covering their escape. Tsunade sends Yamato, Yūgao Uzuki, and a team of Anbu after them and inform them that they seem to be heading towards Takigakure. As they travel, they discuss the impending threat of Akatsuki only to be stopped by Naruto, who spots a ramen shop. They are soon cornered by the Konoha team and a battle ensues between the two parties, forcing the Konoha-nin to retreat. As they recover, the jinchūriki arrive on the outskirts of Takigakure and are confronted by Itachi Uchiha, Sasori and Deidara of Akatsuki and another battle ensues. 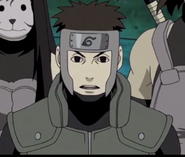