Yukina (雪菜 Yukina) is a member of an all-female race of demons known as Ice Apparitions (氷女, kōrime). She is Kuwabara's love interest, and Hiei's sister.

Yukina's mother, Hina, broke the rules of their people by conceiving a male through her relationship with her lover, a male fire demon. Hina gave birth to twins, a boy and a girl. The boy was taken from her, since he was viewed as being cursed. In order to save Yukina, Ree was forced to drop Hiei off a cliff.

Hina later committed suicide, and her best friend, Ree, raised Yukina. At the right time, Yukina was told about her twin brother, and she left the ice world to look for him.

When Yukina was kidnapped by Gonzo Tarukane, Spirit World quickly dispatched Yusuke and Botan (anime only) to rescue her. Kuwabara, convinced that she was his destined soulmate, also went along to save her. Hiei arrived and stopped Tarukane from escaping with her, but chose to not reveal that he was her brother.

While trying to find her brother, Yukina was captured by the corrupt human Tarukane, who planned to become rich by forcing her to shed tears- as the tears of Ice Maidens instantly solidify into priceless gems called hirusekistones. Yusuke and his friends hear word of this and fight several guards in order to save her. At first glance, Kuwabara instantly falls in love (declaring them linked by the "red pinky string of fate"), and Hiei notices that she is indeed his sister. Tarukane was in league with Toguro, who would become one of their greatest enemies.

Yukina shows up late in the Dark Tournament (during the third round), where she quickly befriends Shizuru Kuwabara, Botan, and Keiko (along with Atsuko in the manga). She reveals that she's there to cheer on Kuwabara and Yusuke, and hopes that she can help them by using the healing abilities that she'd learned. At the same time, Kuwabara was on the verge of losing his fight (and likely get killed) due to being badly injured in the previous round. Yukina arrives in the stadium and calls out to him. Botan believes that having Yukina there will help Kuwabara in the fight. This is proven when he battles and the "power of love" saves him, giving him a much needed power boost and restoring his already depleted spirit energy. With his powers restored, he's able to win his match- allowing the team to advance to the semi-finals.

Yukina remarks after the match that Kuwabara is healing much faster than her powers are capable of, which Kuwabara attributes to the 'bond' between them. In his fight with Elder Toguro, Yukina was his main and only staunch supporter, believing that he would achieve victory even as his own sister believed that he wouldn't survive the fight. Though she is oblivious to Kuwabara's feelings for her, she sheds multiple hiruseki stone's when he is stabbed (and appears to die) by Younger Toguro during his fight with Yusuke.

Yukina, like many of the supporting characters in the series, does not appear in this saga until the final episode, but she does appear in flashbacks of Hiei, in which she gives him her tear stone and tells him to give it to her brother if he finds him (while accidentally calling him brother in the process) In the anime, she is seen living with Genkai and helping maintain the compound. In the manga, due to Genkai's death, she is seen living within the Kuwabara family household, much to the shock and delight of Kuwabara. The two of them are seen approaching Yusuke's ramen stand as well as playing with them on the beach in the finale. In the sixth episode of Eizou Hakusho, Hiei attempts to return his mother's tear to her, claiming that he learned that her brother is dead, but she tells him to keep it, heavily implying that she has finally learned and accepted that Hiei is the long lost brother she had been searching for for so long.

Ice Manipulation: While being held captive by Tarukune, she froze the room whenever he or his men came to retrieve the valuable Crystal Tears she produced.

Accelerated Healing (治癒能力, Chiyu Nōryoku, translated as Healing Talent): Like Botan, and to a greater extent, Genkai, Yukina possesses slight healing abilities. This is made apparent when she uses them to heal Kuwabara, both after his and Yusuke's fight with the Toguro brothers, and later on in the Dark Tournament. For reasons that are unexplained, except by Kuwabara who believes it to be the "power of love", her powers have a seemingly-greater effect on Kuwabara, though Yukina herself is unable to explain it. Yukina also seems to be able to regress into a state where she can't feel physical pain (though she may merely have become resistant due to years of torture by fire talismans), and even heals instantly when Toguro leaves a superficial cut on her cheek. 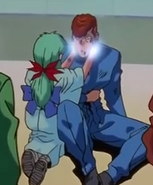