Although she constantly fights with Yuji over even the smallest things, she cares about him as any other sister would; but she also bares feelings of a sexual attraction towards Yuji, even though he is her younger brother. Yuri takes the role of the tsundere troph within the lore of Soukan Yuuji, and usually doesn't mean what she says as insult to Yuji. She deep down loves Yuji more than anything, and has the desire to want to commit incestual acts with him; regardless of cultural norms and taboos and also regardless of her reputation she has at school.

Yuri is very high-strung and strong-willed from her rigorous training and sports competitions at her high school. Yuri may be strong and fit, but is lacking figure. Her figure is at times mocked by Yuji, when the two are in heated argument.

She also feels, at times, inferior to Aoi (her mother) and her brother Yuji due to her crush on him. Sometimes even having a sense of jealousy towards their relationship for one another, and wishing that Yuji was pleasuring her instead. At other times, she can be accepting of their sexual relationship together as long as she still remains a part of Yuji's life and that they still love each other, both as siblings and as lovers in the flesh. 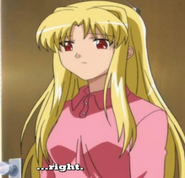