Can use magic by speaking the desired effect backwards

Concentration
A member of the Justice League.

Zatanna appears in the Young Justice cartoon series,[64] voiced by Lacey Chabert. In the episode "Humanity", Zatara initially brings Zatanna to Mount Justice in Happy Harbor to meet the team, and asks the kids give Zatanna a tour of Mount Justice. They pretend to go along with that request, quickly use Miss Martian's ship to leave the cave and track down Red Tornado with Zatanna, referring to her departure with them as "kidnapping". Zatara was displeased that his daughter went on a mission with the team. Robin seems to have an interest in her. She returns in the episode "Secrets", where she and Artemis head to Manhattan on Halloween night. They are ambushed and eventually kidnapped by Harm, a psychotic teenager wielding the mystical sword of Beowulf. While Harm interrogates Artemis, the ghost of his murdered sister, Secret, removes the tape from Zatanna's mouth and allows her to rescue Artemis. Together, the three girls defeat Harm and allow Secret's spirit to move on to the afterlife. Afterwards, Zatanna promises to erect a proper grave for Secret, who had previously been buried in Harm's backyard. In episode "Misplaced", Zatanna is with the team when all the adults disappear. She is able to use a spell to locate Klarion the Witch Boy on Roanoke Island. As her powers seem ineffective against Klarion (he refers to them as "baby magic"), she dons the Helmet of Fate as a last-ditch effort. After Klarion escapes, Nabu(Doctor Fate) refuses to relinquish Zatanna as his host, until her father offers himself as Nabu(Doctor Fate)'s host. After making Batman promise to take care of her, Zatara dons the helmet and leaves Zatanna with the rest of the team. She then moves into Mount Justice with Miss Martian and Superboy and joins the team full-time. She is shown to be clearly devastated by the loss of her father. In "Happy New Year", she and Rocket are now shown as adult members of the Justice League. In the episode "Depths," Nightwing implies a past romantic relationship between them to explain why she was willing to provide him with an enchanted amulet without asking for its purpose. In "Satisfaction", Zatanna and Miss Martian attend Rocket's bridal shower, and fight Captain Cold alongside Bumblebee, Black Canary, Wonder Girl, and Batgirl. In the episode "Cornered", Zatanna, Captain Marvel, and the team battle Despero in the Hall of Justice. She helps by possessing Mal and backfiring Despero's powers on himself. 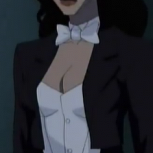 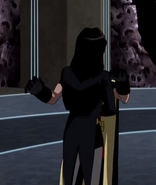